Exploring Cultural Food Flavors. The Base.

My family is eclectic in composition and nature. We are a tribe of New Yorkers, Germans, Puerto Rican’s, Spaniards, British and no offense to those not mentioned! The German branch “die” for Puerto Rican flavor. The Puerto Rican’s “kill” for some German flavor. And round and roly poly we go. We love to cook and love to eat and feel no shame. (although we should).

A Mirepoix is a flavor base made from diced vegetables cooked – usually with butter, oil or other fat – for long time on low heat without coloring or browning, as further cooking, often with the addition of tomato puree , crates a darkened brown mixture called pincage. It is not sautéed or otherwise hard cooked, because the intention is to sweeten the ingredients rather than caramelize them. It is a long standing cooking technique in French cuisine.

When the Mirepoix is not precooked, the vegetables may be cut to a larger size, depending on the overall cooking time for the dish.

Usually the vegetable mixture is onions, carrots and celery, with the traditional ratio being 2:1:1 two parts onion, one part carrot and one part celery. Mirepoix is la flavor base for a wide variety of Western dishes: stocks, soups, stews and sauces.

Similar flavor bases include the Italian soffritto, the Spanish and Portuguese sofrito /refogado, which is made of braised onions, garlic with tomato, as well as the Turkish variation with the tomato base paste instead of the fresh tomato of the eastern Mediterranean/ Balkan region. We will discuss these particular flavor vases in greater detail during a future feature here at Capricorn Science.

They use onion, carrots and possibly celery and beets or pepper.

Also known as the holy trinity it includes onions, celery and bell peppers and possibly French duxelles mushrooms and often onions or shallots and herbs, reduced to a paste.

This segment enhanced the French Mirepoix. It’s wonderful and significant and will improve the flavors of your cuisine.

A quick and scrumptious Sunday lunch. Flounder fillets marinated in a bit Rosemary, garlic powder and pepper. Melt a couple of tablespoons in your favorite skillet. Add the fillet while hot, without burning the butter. Read more… 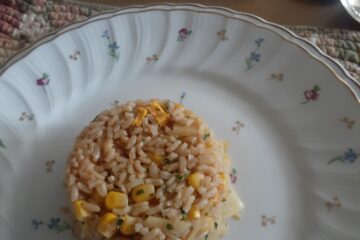 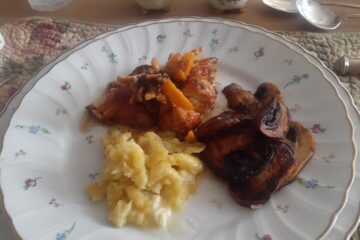 All meals should and could be special. Yet time is of essence and making a delicious lunch in fifteen minutes or less is a blessing. Taking turns with the same seasoned pan adds to the Read more…